Rising Sun was originally established in Hokkaido, Japan as a backcountry ski guiding operation and this remains our core business. However, Rising Sun`s owner Andrew Spragg is from Canada and returns to Whistler every summer to ride the amazing trails of the sea to sky corridor.

Our summer operations are modeled off of our winter programs based on the understanding that local knowledge and flexibility are the keys to making the most of an adventure holiday. There is one key difference though – operational size. In summer, we are a small 1 to 2 guide operation drawing even more heavily on personal experience to deliver the most amazing mountain bike trips we possibly can. 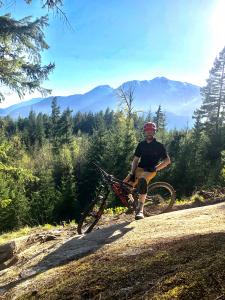 Andrew grew up in Calgary before moving to the west coast for university in 1998. Once in Vancouver, Andrew found the North Shore, bought his first downhill bike and started exploring the trails of the sea to sky corridor. Along the way, winter pursuits took him to Japan where he established Rising Sun Guides and began showing backcountry ski and snowboard enthusiasts his adopted home of Hokkaido.

But the great outdoors and incredible bike trails of B.C. brought Andrew and his wife Yui back to Whistler every summer. Eventually they decided it was time to share the best of the West Coast with mountain bikers from around the world.

Andrew is certified through the professional mountain bike instructors association, maintains 80 hour wilderness first aid and has been guiding in various capacities (ski, splitboard, bike, raft and canyoning) since 2005. He is also an apprentice ski guide with the ACMG. 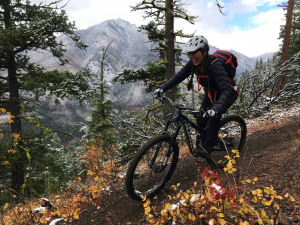 Yui is from Hokkaido, Japan but made her first visit to Canada in 2008. That trip was just a short holiday but in 2011, she and Andrew began returning to Canada every summer. Living in Whistler, it only made sense to get a mountain bike and with the bike park on her door step, Yui quickly progressed.

Yui is always available for much needed support, whether its a shuttle pick up, assistance with logistics or just to deliver a cold beer and a big smile at the end of an amazing ride!